For the longest time, Garmin has been the "go-to" choice for hand-held GPS units. This, despite its kludgy, non-intuitive software interface, battery-guzzling electronics and desultory customer support that may or may not be helpful when they may or may not get back to you.

Despite those teeth-gnashing frustrations, they've been better than the other player, Magellan.

I've had four Garmins, most recently the Oregon 450t and the wrist-mounted Foretrex 401. Clearly, they can both do the job as long as you're prepared to carry a ton of batteries and work with a kludge.

THE RIGHT APP FOR GARMIN PURGATORY


For years, I was resigned to there being no escape from Garmin's GPS purgatory.

But, it turns out there's an app for that: Topo Maps App created  by Philip Endecott, a computer electronics engineer in Cambridge, U.K.

The App is available for iPhone and iPad but not Android yet. Search for Topo Maps in the Apple app store. Make Sure you get the one by Phil Endecott.

The web and app store pages do a great job of illustrating what the app does and how it works. The web page even has a detailed user guide.

The app is $7.99 and includes -- INCLUDES -- unlimited topo maps in the United States and Canada.

But just because you have a map on a digital device doesn't mean you can dispense with dead-tree versions. Always take a map protected in a Zip-Loc. If all else fails, that and an old-fashioned compass will get you home. Every pack I own -- from day packs to 85-liter backpacks all have a compass that stays there.

Last August, in preparation to summit Mt. Langley (at 14,042 feet, California's second tallest peak next to Mt. Whitney) I installed the Topo Maps App on my iPhone 4s then downloaded the free topo maps I needed. I downloaded several adjacent ones as well. I grabbed the high-resolution maps over WiFi at home. Each full map took about 15 seconds.

The maps app works with the GPS alone but the map download needs a cell  signal or WiFi. That's why I downloaded maps around the area I was headed. Just in case.

I took both with me along what was a well-defined trail to the base camp at Long Lake.


The most noticeable thing was the superior clarity of the app on the iPhone screen and the responsiveness. The 450t has a touch screen, but it is slow and balky.

The next difference is that the iPhone maintained satellite lock better than the Garmin, even in the wooded areas at lower elevations (9,000 to 10,000 feet). The Garmin was okay above the tree line.

Both were equally accurate -- dead-on -- when they had satellite lock.


The Topo Maps app has a very cool feature not available on the Garmin that draws a circle around your location (see above) and then tells you how far it is to various landmarks. While not accurate for those of us unable to fly, it can give you a rough estimate, especially when you examine how close the topo iso-elevation lines are together. It can also draw a bearing line from your location to a given point and indicate how far that is.

The Topo Maps app's biggest flaw is the lack of a compass feature which the Garmin has. In an email exchange with me, Mr. Endecott indicated that a compass feature might be in the works for a future upgrade. Meanwhile, there are many other compass apps for the iPhone. And the mechanical one in your pack (hint, hint).


Both the Garmin and iPhone were turned on at the same time and off at the same time: approximately 7 hours. During that time, the iPhone dropped about 25% of its charge. The Garmin had sucked almost all the life out of two, 2,500 mAh rechargable NiMH AA batteries. Sure, the AAs only weighed an ounce apiece, but I had brought eight of them to make sure of having enough juice.

I'll cover other ways I've slimmed my pack down in future posts. But ditching the Garmin is a good step. Whether on or off, the iPhone goes with me because I don't leave it or other valuable items at the trailhead in my Silverado HD. So, here's the math for that: The Garmin and two batteries weighed 7.25 ounces. The IPhone, 6 ounces.

But, I'm a "just in case" kind of guy, and even if the Topo Maps app battery use could gave gotten me back with out a recharge, I found a 5.5 ounce device (future post) that will recharge my phone twice. So, that saves not so much over the six ounces of spare batteries for the Garmin.

However, leaving the batteries and the Garmin at home saved a total of 7.75 ounces. Not bad for a device that out-performs the kludgy half-pounder I left at home.

READ ALL ABOUT IT


That's what mattered most to me. You should make sure to read all about it for yourself because your mileage will vary.

You need all the detail you can get. Zoom in and out with your familiar iPhone finger motions. 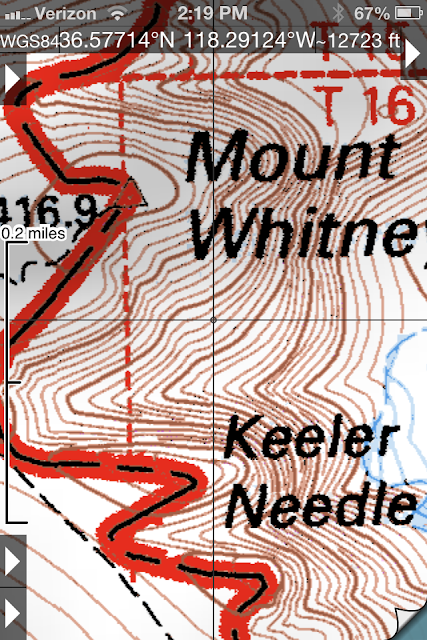