I've previously reviewed Phil Endecott's Topo Maps app that lets me ditch my Garmin 450t (207 grams) in favor of my slightly lighter iPhone (168 grams - 5-5/8 ounces) which is more responsive and has a longer battery life.

The Garmin takes AA batteries and can blow through half a pound of them (at about an ounce each) in a three- or four-day trek. Given equivalent device usage, (which I tested on my summit of Mt. Langley) the iPhone running Topo Maps should make that entire trip without a recharge.


But I'm a "just in case" trekker which means that I plan for contingencies (including the need for paper maps). On previous treks, I've tried several solar charging devices and found them heavy, bulky and slow to recharge even when there's plenty of sunlight. Extra weight sucks on a backpack. And clouds are a definite contingency.

For this review, I tested (in alpha order): 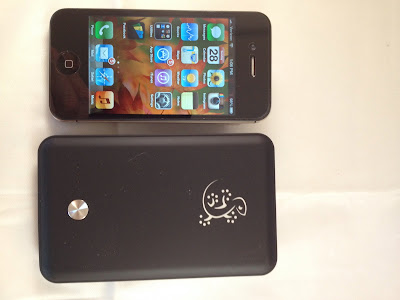 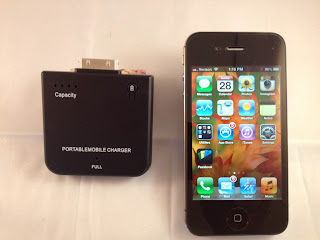 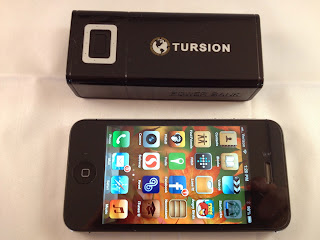 The capacity of a battery or battery pack is expressed in milliAmpere-hours (mAh) and, indirectly, is a measure of the total number of electrons it's capable of producing. In general, the larger the mHh, the heavier the device will be.


My choices were based on a balance between weight, charging power and the average length of my  treks which tend not to go over four days because I am the sole editor behind a wine industry digital publication that comes out five days a week.I'd love to be out longer, but that's in the future.

For those reasons, I decided that I wanted the best charging capacity for the weight (ounces per full charge) at a reasonable price. There are many other battery packs with higher capacities, such as the Yoobao 11200mAh which weighs in at about 9.3 ounces and costs roughly $50 at Amazon. I looked at it. It was in my price range, it but weighed over half a pound and that ruled it out.

HOW WERE THE BATTERY PACKS TESTED?


I charged the battery packs fully. While the packs charged, I ran my iPhone battery down by loading every one of my 32 apps including Slacker Radio which comes with an option to keep the screen from going to sleep. The iPhone's display is usually its biggest single battery draw followed by  GPS and heavy WiFi usage -- streaming music for example. It usually took about seven hours to run the battery down to less than 10%.

The battery gets warm when it's discharged quickly. I took it out of its case to keep it cool and avoid damage.

I divided the weight by the number of total full charges to get the weight per charge.

The Stitchway simply failed. The first one I bought had a faulty connector. The company sent another one at no cost, but the best it could do was charge my iPhone from 8% to 17% before it quit. It seems to have gotten some okay reviews on Amazon, so I could have been the statistical victim.

WHICH ONE WILL I TAKE ON THE NEXT BACKPACK? 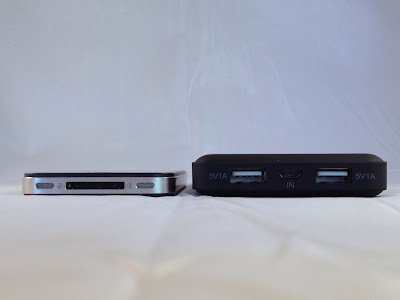 Snow Lizard. it's just 1.25 ounces heavier than the Tursion but give me 1.23 more full charges. The image above offers a comparison of the thickness. I don't see the black version available for sale as frequently, but the white model has the same guts. I bought mine at Office Depot.

WHAT ABOUT CHARGING NON-IPHONES?


The Tursion and Yoobao both come with a huge number of adapters that will fit nearly any  phone. I did have a problem with the Tursion's white AC->USB cube which overheated and failed when charging the battery pack the first time. No biggie. I have spares. 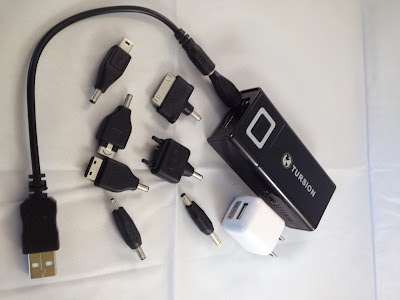