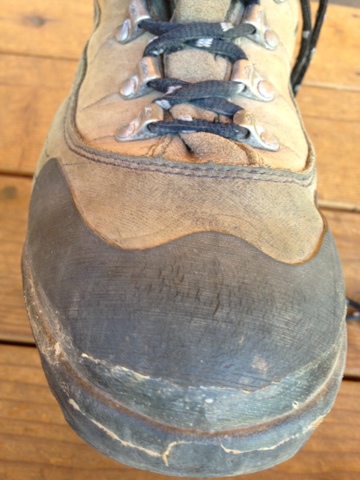 After a couple of months rehabilitating a calf injury, I slipped into my trusty old Montrail boots only to find out that they had slipped beyond any hope of their own rehabilitation.

I had been patching up fissures with ShoeGoo and have replaced the laces too many times to count.

But, I thought, they'd be fine for another season.

I was very wrong.

After too much time away from the mountain, I slipped into the boots a couple of weeks ago, tossed a couple of 25-pound weight plates into a pack along with my hacked CamelBak (see McNett Water Filter Hack = Crazy Good, and Hacking The Pioneer Pro Water Filter)

Then I headed into a part of the local Mayacamas mountains that have some very steep slopes that make for good Sierra trail conditioning.

After a solid three hours and eight miles of that, I knew new boots were in the cards.

The biggest problem with the old Montrails is the fact that I slipped, slid and skated down steep rock and debris covered trails. The almost flat (see below) treads were shallow, rounded at the edges and unable to grip. 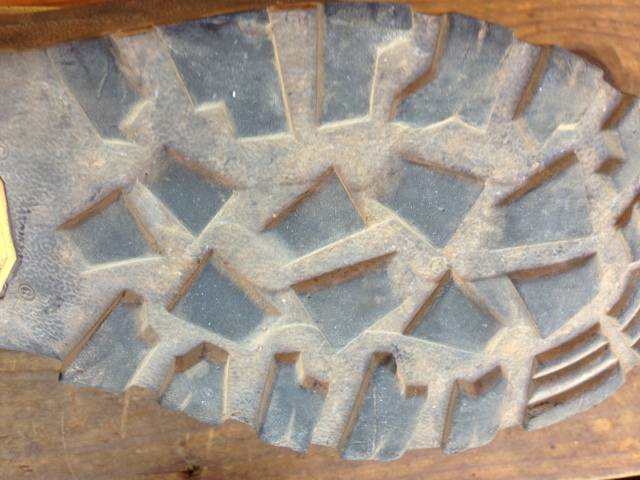 AND THEN BLISTERS - FOR THE FIRST TIME IN YEARS


On top of busting my ass sliding down the slopes, I developed blisters from the sand-paper-like surface at the heel.

I cannot remember the last time I had a blister. But, despite years of having been broken in, and continuous treatment with all the right leather and fabric compounds, the inner surface had finally broken down.


I think the breakdown was accelerated by numerous over-the-boot-top stream fordings in the Sierras. I've seen people take their boots off to ford streams. And I've seen a large number of them lose footing because skin doesn't grip like Vibram and feet are not as wide and sturdy. Many of those folks sprain ankles and come out of the water bleeding.

Don't be one of those people. If you have to sacrifice something, it ought to be your boots. Like mine, they will eventually die. But my Montrails lasted a solid 8 years of hard duty.

First of all, buy a boot that the maker recommends for backpacking. They are sturdier, higher and support better than hiking boots. Hauling around 35 to 50+ pounds in a pack requires the best where you meet the trail.

In addition, backpacking boots will have a stiffer sole that helps prevent twisted ankles and improves overall balance and footing.

The other factor is to try on a lot of boots until you find one that feels comfortable. Every bootmaker seems to have their own "last" -- the pattern that determines the boot configuration.

When you try on boots, lace them tightly, very tightly. You should have no heel slip but still have enough room to wiggle your toes easily and comfortably.

The place you buy the boots from should have a steeply slanted surface for you to stand on, facing downhill. Do that and try your best to make your toes hit the very front of the boot. That would be bad and you'll want a bigger size otherwise your trip down the mountain could be more painful that the climb up.

If you find that your heel slips in the larger size that fits your toes, then you need either a boot that comes in widths, or a different brand with a different last...one with a narrower heel.

Take time and try on a lot of boots until one is perfect. The better the fit, the less time (and agony) to break them in. "Almost good enough" almost never is.

ASOLO AND MY FEET

Last December before heading out for the California Matterhorn's 12,000+ summit, I bought a pair of Asolo's crampon-ready mountaineering boots (Asolo Boots: Rave) and found that they fit perfectly. I bought them only about a week before the trek. And yet, with only limited wearing, the were the most comfortable I had ever worn. And no blisters through the snowshoeing and ice climbing.

Great boots. Full grain leather (thick) and nice padding, like a sofa for my ankles. About 3 ounces (each) heavier than the Montrails. 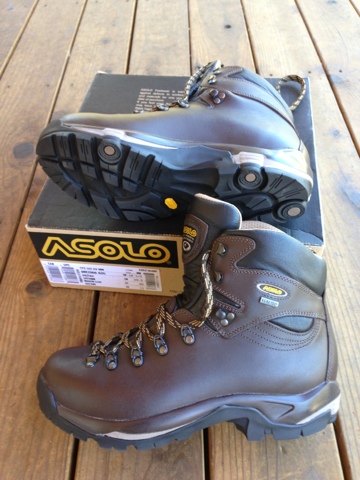 But, when I got home and started to think about things, I realized that, despite the fit, they were the wrong boot.

Because the thick leather and the luxurious padding would take forever to dry after fording a stream.

So, without ever wearing the 520s outside the store, I took them back and bought the Asolo Khumbu GV instead. Still glove-comfortable with less padding. And the split leather (thinner) and fabric construction will dry faster. The Khumbu GV has a wicking nylon lining to speed drying  that the TPS 520 GV does not.

Both boots are Gore-tex lined with Vibram soles.

They're both about the same price, $285 which is pricey, but ought to amortize at about $28 per year. 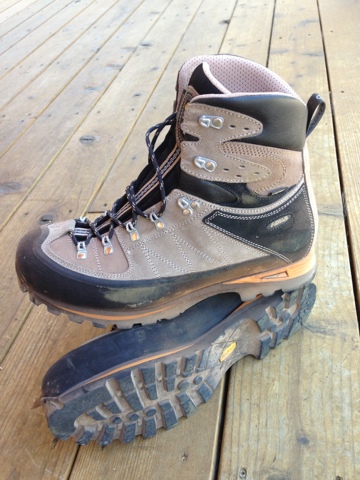 I took the new boots for a spin yesterday and the results were fantastic.

I went out in a light pack (about 30 pounds) and headed up pretty much the same extreme-slope trails in the Mayacamas that spelled doom for the old Montrails. Three hours and about 8.25 miles later the verdict came in: No blisters and only mild pressure on ankles and instep that will gradually resolve with more wearing.


It's a pain in the butt to stop and re-lace every 10 or 15 minutes, but that's vital to breaking in new boots without injury.

Laces stretch and so do the boot's leather and fabric. If you don't constantly snug the laces, your heel will slip uphill and you will get blisters. Likewise, too loose in the toe areas and more blisters.

Be aware that lacing tightness may need to vary with the area of the feel. I have a wide ball of the foot, high instep and and a narrow heel. That means I have to adjust lace tension tightness in three zones to keep the heel seated snugly in the boot without putting too much pressure on the instep and toes.

You'll need to experiment to get your boots adjusted to your own foot. I found this set of images on the Backpacker website an excellent starting point despite the blizzard of harassing advertisements.