The "Give A Damn" Stick

The dangers of trekking through wilderness areas often pales by comparison with running along public streets and roads.

I've had near misses and even a glancing blow from the mirror of a pick-up driven by someone texting.

Even those people who seem to be paying attention often have no sense of how wide their vehicles are.

It's bad enough running on country roads with no shoulder.

Then there are the fog line straddlers on main roads, especially on inside curves.

But, basically,  way too many drivers don't really give a damn about the crazy runner on the road.

They do, however, care about getting a scratch on their car which is why I invented the "Give A Damn" stick.

It's light (aluminium tubing) and about two feet long.

Both ends are padded so it really can't scratch a car. One segment is covered with bright orange reflective tape, the other with a silver tape that is even more visible when illuminated in the dark.

It's easy to hold in the middle while running.

Most cars spot it and give me space. Those that seem not to be paying attention start to give a damn when I hold it up and shake it at them.

In addition, The Give A Damn Stick is segmented to that it folds, making it easier and less awkward to carry when running on sidewalks. (I usually refer to the stick in more scatalogical terms, but the "Damn" part works better in polite company.) 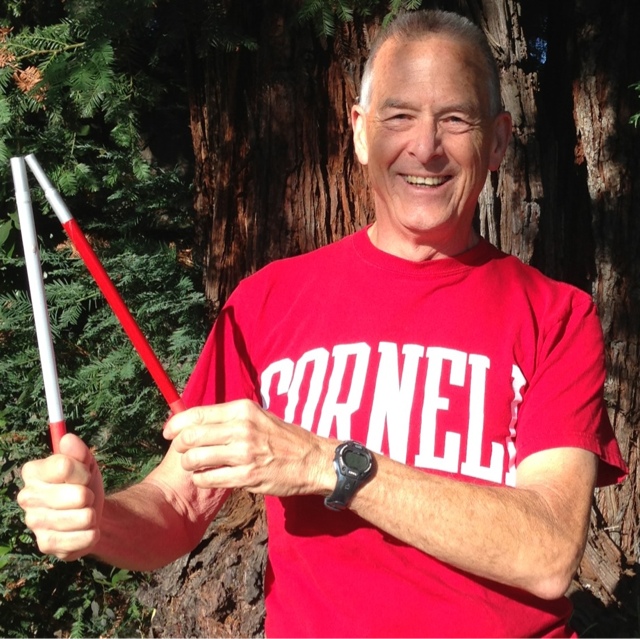 I have found the metallic sound "Snick! Click!" it makes while going from folding to straight stops angry dogs in their tracks. The sound is sort of like a softer version of racking a round in a pump shotgun stops

Canines give a damn because the sound is foreign and says, "beware." I've never actually had to swat at a dog. The sound does it all. So far.


And, yes, I always run in bright colors.

I'm working on a new model of the stick that's a little larger in diameter and contains a light at one end and pepper spray at the other.

Let me know if you'd like one. I'll see about making more.
Posted by Lewis Perdue at 11:58 AM