A Note of Veterans Day Thanks To My Papa 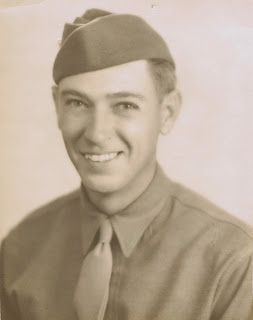 Thank you Papa for being my Dad.

And on this veterans Day, thank you and all the members of "The Greatest Generation" for your WWII service in New Guinea and the Philippines.

And for the close calls and beach landings at Leyte Gulf, Mindanao and a lot of other places you told me about when I was small enough to sit on your knee and not understand the significance of what you said.

I do remember a lot of your stories, especially the one about being on a tanker ship made of concrete and loaded with so much gasoline that people trying to lighting up a cigarette was a bigger threat than Japanese submarines or aircraft.

Mama's handwriting on the back of this photo tells me that this photo of you is from 1942 shortly before you shipped out to a South Pacific ocean that was nothing like an Oscar and Hammerstein score.

Thank you for all that. And even though you died in 1985, thank you for your occasional vivid appearances in my dreams.

Some More Data And A Request To Readers Of This Post


The photo above is the only one I have of my father as a young man.

I'm grateful because it's a lot more than he had because his father abandoned him as an infant and disappeared. I do, however, have some idea of what his father looked like because my son William (named after Papa) looks more like him than I do.

I would, however, be grateful to correspond to anyone who knew him in the Army or in his early years. Ironic that we never ask the important questions while those we love are still present to answer them. Or perhaps it takes us years to understand the questions that we should ask.

All I know about his military service are the following two items:
If you knew him there ... or anywhere else ... I'd love to hear from you.