I've written frequently about the quest to slim down my backpack. 50 pounds was my standard for many years since I seemed to be able to haul that anywhere without any problem. But that began to get old as I entered by sixties, so I slimmed it down to 40 pounds by my 65th birthday last year.


One of the areas I have looked at was my trekking pole I fashioned more than 20 years from a White Alder limb left over from some trail clearing. I looked at lighter alternatives -- primarily aluminum alloys and carbon fiber. But both of those are electrical conductors.

Another word for electrical conductor, especially at high Sierra elevations, is "lightning rod." I have had my own close calls and have friends who have been struck and injured or killed: 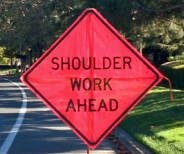 It's easy enough to become a crispy critter while trekking with a lightning rod, so  I stuck with my old White Alder pole.

Then, in early November 2014, a catastrophic injury to my right shoulder requiring extensive surgery has made me take a new look. I am still in physical therapy and may or may not recover quickly enough to get back to the Sierras this year.

I was recently cleared to hike with a day pack of 15 or 20 pounds. But with the recovering shoulder and muscles that are only now being rebuilt after being totally immobilized for the first 2 months, having a lighter trekking pole has moved back up to the top of my list.

In addition, the White Alder has continued to develop a severe curve as it ages and dries.  Compare the photo of the pole above to this one taken just yesterday:

After extensive searching, I have been unable to find an alternative to metal and carbon fiber.

Inspiration From An Unlikely Place

Yard work is not my favorite task. But I got an idea while I was looking at the objects that were leading me to drudgery.

Note the polymer handles on the yard rake (left, next to the big wide shovel) and shovel (center, background.)

So, with this inspiration in mind, I headed to the local hardware store and bought a yard rake and a leaf rake, both with polymer handles.

This is not hard:

Drill out the rivet.

Pull off the  tines.

I found the smaller leaf rake handle to be perfect. And it weighed 14 ounces. The White Alder weighed 1 pound, 14 ounces. The weight-lightening task of slimming down a pack is usually one of saving a few ounces here and there.
Getting a one-pound savings in one fell swoop is a victory. And will make hiking easier as my shoulder recovers.

Adding a crutch tip to the open end will add another ounce. No big thing.